Home / Reference / Statistics for Shooters – Executive Summary
Over the past 3 articles, we covered a lot of ground! Before I jump to other topics, I wanted to simply provide a bullet-point recap of key points from the end of each of those articles and publish it here as an executive summary. This might be a good overview or reminder for those that read each article or hits the highlights in case you missed one.

Over the past 3 articles, we covered a lot of ground! I realize this series was deeper than what most people cover in blog posts. I may tend to get closer to a technical whitepaper than traditional blog posts! 😉

Before I jump to other topics, I wanted to simply provide the bullet-point recap of key points from the end of each of those articles and publish it here as an executive summary. This might be a good overview or reminder for those that read each article or could hit the highlights if you missed one. (If I’m honest, part of this is simply to make it easier for myself to quickly to reference!)

Part 1: Statistics Fundamentals & How To Predict The Future

Read the full article: How To Predict The Future – Statistics For Shooters Part 1

If you’re interested in learning more about this topic, I’d invite you to read the full articles or visit my works cited page for this Statistics For Shooters series. There I provide links to many other books and online resources that dive deeper into related topics.

Note: I didn’t enable comments on this post, because it’s simply excerpts from other posts. If you have comments or questions, go add those on one of those original posts.

Cal Zant is the shooter/author behind PrecisionRifleBlog.com. Cal is a life-long learner, and loves to help others get into this sport he's so passionate about. Cal has an engineering background, unique data-driven approach, and the ability to present technical information in an unbiased and straight-forward fashion. For more info, check out PrecisionRifleBlog.com/About.
Previous Precision & Group Size – Statistics for Shooters Part 3
Next 6.5 Creedmoor Ammo Test Part 2: Physical Round-To-Round Consistency 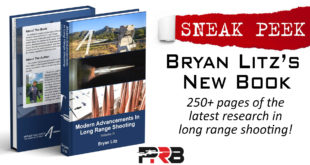 Bryan Litz and the team from Applied Ballistics have released another book packed with their ...