Home / Rifles / Barrels / Precision Rifle Barrels – What The Pros Use Precision Rifle Barrels – What The Pros Use 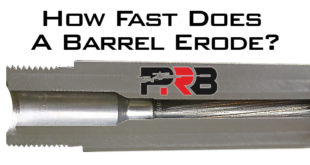 This is an exciting post, because many believe the barrel is THE most important component of a precision rifle. That’s hard to argue with, although I’m sure some would. I recently surveyed the top 100 shooters in the Precision Rifle Series (PRS), and this post reviews the barrels those elite shooters were using in 2015. The PRS tracks how top competitors place in major rifle matches across the country. These are the major leagues of sniper-style competitions, with targets typically from 300 to 1200 yards. These world-class shooters represent the best of the best in terms of long-range shooting in field conditions. For more info on the Precision Rifle Series and who these guys are, or to view what other gear they’re running scroll to the bottom of this article.

This is one of several posts based on that gear survey of the top PRS shooters. Want to be the first to know when the next set of results is posted? Sign-up to receive new posts via email.

Here is a look at the barrels the top rifle shooters were running this year: Bartlein Barrels leads the pack again for the 4th year in a row! Almost half of the shooters in the top 100 were running Bartlein barrels. Bartlein uses some of the most advanced computer-aided manufacturing processes available. Bartlein explains, “Our rifling machines are so accurate, we can carry the twist rate to the 4th decimal point (example: 11.3642).” Wow.

Hawk Hill Custom Barrels made a huge leap in 2015, with 26% of the top shooters running them. Last year only 4 of the top 50 shooters surveyed reported running a Hawk Hill Custom barrel, and this year there were 13 in the top 50 … a 350% increase! Hawk Hill makes make 4-groove single point cut rifled barrels that are hand lapped. I was talking to a well-respected gunsmith about barrels a couple weeks ago, and he suggested I take a look at Hawk Hill. He said it was a small shop, where there is just a handful of passionate guys doing all the work. He thought because it was such a small operation, they may be able to maintain more consistent quality and tighter quality control than some of the bigger suppliers. While I can’t say whether that’s the case or not, there were a lot of these shooters who gave them a strong vote of confidence.

Bartlein and Hawk Hill combined to represent the barrels that 7 out of 10 shooters were running, but there were several other world-class barrel manufacturers represented:

I also asked these top shooters what barrel contour they were running, and here is what they said: There may be a few contours you haven’t heard of in this list:

There were a couple shooters who said they were using some type of custom contour, and the chart above doesn’t reflect those. I didn’t have any information on the dimensions or details of the contour, so it didn’t seem helpful to include them.

If you’d like to see the weights and dimensions of the standard contours I mentioned (like Heavy Palma, Remington Vamint, Medium Palma, MTU, M24, and Heavy Varmint), here is a good resource that I reference all the time for those details: Bartlein Barrel Contours. Barrel contours may vary slightly from one manufacturer to another, but for the most part they’re all very, very similar.

And finally, I asked the shooters what barrel length they were running: You can see almost 1/2 of these guys were running a 26” barrel, but there were also some 20” and 22” barrels represented among the top 10 competitors. The 20” barrel was on Matt Perry’s 6mm Dasher rifle, and Tate Streater was the one in the top 10 with a 22” barrel on his 6mm Creedmoor. You can see the 26” barrel was the most popular for most cartridges. One interesting note is the 6mm Dasher had barrels from 20” to 28”. That is a pretty big range! Obviously a great shooter can be effective with any of them.

Barrel of THE Top Shooter The guy who took 1st place overall in 2015 was David Preston. He was the first shooter to ever finish the season with a perfect score of 400, which means he won 1st place in at least 3 PRS matches in the regular season and he also won the PRS Championship Match, which was a head-to-head competition of the top 100 shooters. That is no small feat!

David was using a 26” Hawk Hill Custom barrel in a Remington Varmint contour and chambered in a 6×47 Lapua by Short Action Customs. The PRS is a championship style point series race based on the best precision rifle matches nationwide. PRS matches are recognized as the major league of sniper-style rifle matches. These matches aren’t shot from a bench or even on a square range. They feature practical, real-world field conditions, and even some improvised barricades and obstacles to increase the difficulty from hard to you-have-to-be-kidding-me. You won’t be able to take all shots from a prone position, and time stressors keep you from getting to comfortable. Typical target ranges are from 300 to 1200 yards, but each PRS match has a unique personality with creative stages that challenge different aspects of precision shooting. You might start off the day with a single cold bore shot on a small target at 400 yards, then at the next stage make a 1400 yard shot through 3 distinct winds across a canyon, then try to hit a golf ball on a string at 164 yards with no backstop to help you spot misses (can’t make that up), then see how many times you can ring an small 6” target at 1000 yards in 30 seconds, next shoot off a roof top at 10”, 8”, and 6” targets at 600 yards, followed by a speed drill on 1” targets at 200 yards and repeated at 7 yards … plus 10 other stages, and then come back tomorrow and do some more! Many stages involve some type of gaming strategy, and physical fitness can also come into play. For a shooter to place well in multiple matches, they must be an extremely well-rounded shooter who is capable of getting rounds on target in virtually any circumstance.

There are about 15 national-level PRS matches each year. At the end of the year the match scores are evaluated and the top ranked shooters are invited to compete head-to-head in the PRS Championship Match. We surveyed the shooters who qualified for the championship, asking all kinds of questions about the equipment they ran that season. This is a great set of data, because 100 shooters is a significant sample size, and this particular group are experts among experts. It includes guys like George Gardner (President/Senior Rifle Builder of GA Precision), Wade Stuteville of Stuteville Precision, Jim See of Center Shot Rifles, Matt Parry of Parry Custom Gun, Aaron Roberts of Roberts Precision Rifles, shooters from the US Army Marksmanship Unit, and many other world-class shooters.

Think of the best shooter you know … it’s actually very unlikely that person is good enough to break into the top 100. I know I’m not! I competed against a few of these guys for the first time earlier this year, and I was humbled. It’s incredible what these guys can do with a rifle. For example, the match in Oklahoma I was in had a station that required you to engage 4 steel targets scattered at random distances from 300 to 800 yards, and you only had 15 seconds! I think I hit 2, and rushed my 3rd shot. I didn’t even get the 4th shot off! But, one of these guys cleaned that stage with 4 seconds to spare! Yep, he got 4 rounds on target at distance in 11 seconds. That’s the caliber of shooter we’re talking about. It’s very different from benchrest or F-class competitions, but make no mistake … these guys are serious marksmen.

Thanks to Rich Emmons for allowing me to share this info. To find out more about the PRS, check out What Is The Precision Rifle Series? or watch this video to see it in action.

Cal Zant is the shooter/author behind PrecisionRifleBlog.com. Cal is a life-long learner, and loves to help others get into this sport he's so passionate about. Cal has an engineering background, unique data-driven approach, and the ability to present technical information in an unbiased and straight-forward fashion. For more info, check out PrecisionRifleBlog.com/About.
Previous Custom Rifle Actions – What The Pros Use
Next Rifle Chassis & Stocks – What The Pros Use