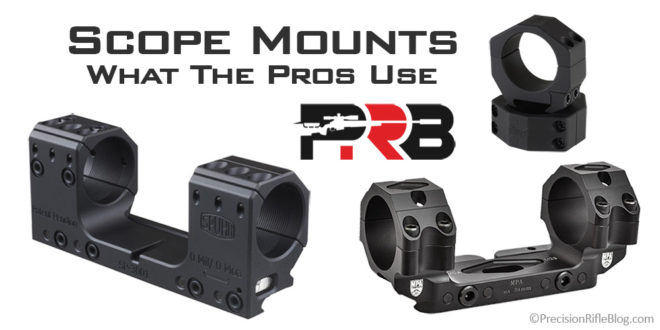 Best Scope Mount – What The Pros Use

I’m currently publishing a series of posts that highlights the gear the top ranked shooters in both the Precision Rifle Series (PRS) and the National Rifle League (NRL) are running in long range rifle matches. (Learn about the PRS & NRL.) This group of over 150 competitors represent the best precision rifle shooters in the country. My last post focused on the rifle scopes this group of shooters was running, and I intended to also include what scope mount/rings they were using … and one of my astute readers noticed I forgot. My bad! This post will quickly cover scope mounts! 😉

I know so many shooters who save and save for their first precision rifle, and then save and save for a capable scope … but then buy whatever cheap rings the local gun shop has that fit. The scope mount is the bridge connecting what you’re using to aim with what is actually firing the bullet. I’d strongly recommend that if you buy a nice rifle and scope, please don’t cut corners on the mount. That’s like a player in the NFL who has a unbelievable kickoff return, but he starts celebrating a little too quickly and accidentally fumbles on the 5 yard line instead of scoring a touchdown. Doh! Cheap rings can allow the scope to move under recoil (in erratic ways that are hard to diagnose) or even damage the tube of your scope. That’s doesn’t mean you have to spend $400, but it probably does mean more than $50 – probably closer to $120. (Read on to learn which one that is!)

With that said, let’s dive right in! Here is the data on what these guys are currently running: There was a clear favorite scope mount: the Spuhr Ideal Scope Mount. No surprise there for a lot of us. When I asked the top shooters this same question on the 2014 survey, Spuhr was the most popular brand then too – although this time Spuhr has a much more commanding lead. 27% of the shooters trusted the Spuhr scope mount! It took the next 3 brands combined to outnumber the shooters running Spuhr mounts. The street price on these scopes is around $400, which is pretty steep … but I’ll highlight several of the compelling features of the Spuhr mount in a section later in this post. The Spuhr mount is available in a ton of different models for various heights, scope tube diameters, and can mount to picatinny rails or a host of other interfaces.

Behind the Spuhr mount, there was a tie for 2nd most popular scope mount, between Masterpiece Arms (MPA) and Seekins Precision. MPA was more popular among the guys at the very top, so I’ll touch on their product first.

MPA is all about testing the crap out of their products, getting feedback on what works and what doesn’t, and making incremental improvements. They’re more committed to that than any company I’ve ever seen. When it comes to their scope mount, a bulletproof connection to a picatinny rail was top priority, so they tweaked on how the mount locks onto the rifle … until they could pretty much park a car on top of it! 😉 The MPA scope mount provides over 3.5” of rail interface, with multiple locking lugs on the bottom of the rail interface for absolute return to zero. MPA’s mount has a unique NATO spec rail interface system that pulls the mount onto the top of the pic rail, which they say provides over 200% more rail contact than other competitive mounting systems that pinch the rail. The Masterpiece Arms BA Scope Mount can be seen below, which is what 13% of these top shooters were running. The street price is currently $250, which means it’s 40% less expensive than the Spuhr mount! Seekins Precision scope rings are legendary. To know how serious Seekins is about their rings, just listen to how the company started: Glen Seekins was on a deer hunt in 2004, which ended unsuccessfully due to broken scope rings. Drawing upon his mechanical design background, Glen returned from the hunt, fired up his CAD program, and spent the next few evenings designing Seekins Precision’s flagship product: Seekins Precision Scope Rings. He took his design to the machine shop that employed him at the time, and together they manufactured the first set of rings. Glen Seekins is very serious about his scope rings, which must be why 13% of these top shooters trust his product on their match rifles. The street price on these rings are around $120-140, which makes them not only 70% less expensive than a Spuhr mount, but about half of the cost of the MPA mount too. If you are looking for the best value out there when it comes to rings, look no further than these Seekins Precision Rings!

Note: A few shooters indicated they use Vortex rings. Seekins is one of the OEM providers of Vortex rings. You can easily notice that the Vortex Precision Matched Rings are virtually identical to the Seekins rings above. Vortex buys them from Seekins and simply rebrands them. Rebranding OEM parts like that is common in the industry. But not all Vortex branded rings/mounts are made by Seekins, so if a shooters said they used “Vortex” and not “Seekins” I kept those broken out into the Vortex category, but it’s very likely that some (if not the majority) of rings branded “Vortex” were actually made by Seekins Precision.

Just over 50% of the competitors were running a scope mount made by one of those 3 brands. There were also many shooters running rings/mounts made by Hawkins Precision, American Rifle Company (ARC), Vortex, Nightforce, and Badger. If you add those 5 brands to Spuhr, MPA, and Seekins, that group of 8 brands account for 88% of the top shooters!

The remaining 12% were divided among 15 other brands. All of those other brands are clearly also capable of producing reliable rings, or these guys wouldn’t be able to perform at the level that they are. So I don’t want to claim they aren’t as good, but they just weren’t as popular as those other brands.

Because the Spuhr mount is so popular, I wanted to highlight a few features to help people understand why they’re so compelling. Since it’s priced around $400, which is significantly higher than all the other rings and mounts on this like, what in the world could be so special about it? I’m glad you asked! 😉 From an engineering standpoint, the Spuhr mounts are brilliantly elegant. It is so well thought-out, with a ton of features packed into a streamlined and rugged product. Their Ideal Scope Mount System is a one-piece mount that is precisely machined from a single billet of aluminum, which means there is no need to lap the rings. The rings are perfectly aligned, which ensures more surface contact with the scope tube and prevents stress on the scope tube, which can dent the tube, distort the reticle, and even cause adjustment problems. Todd Hodnett, arguably the most respected sniper instructor in the world, says he sees more people miss a shot at distance because the rifle was canted than any other reason. It seems to drive him crazy, because you can avoid that problem altogether with a simple bubble level! The Spuhr mount has you covered there, with a bubble level integrated into the rear of the mount that is easy to see from behind the rifle and doesn’t add any bulk. I personally don’t like the idea of attaching a ring-mounted level to my scope, because those typically need to stick out away from the scope to be visible, and if it gets hit or caught on something … it basically becomes a lever that is applying mechanical force to bend the scope tube. Scopes are too expensive to be damaged by a cheap bubble level. This is an elegant solution. The rings on the Spuhr mount are low profile and cut at a 45 degree angle, which keeps the mount from obscuring the knobs. This makes it easy to see your exact adjustment with very little head movement.

The Spuhr mount also has built-in extensibility with attachment interfaces covering it for mounting accessories directly to the mount. This could include dope card holders, cosine indicators, reflex sights, lasers, other rails, nightvision equipment, etc. There are really no limitations to what can be attached – I’ve even seen a GoPro camera mounted to a Spuhr. The extensible interfaces provides maximum flexibility with minimal footprint.

The clamping surface of the Spuhr rings is very wide. This helps ensure a solid grip, but also means they won’t work with every scope out there. They definitely work with most scopes, but if you have any doubts you might contact Spuhr directly and they can help you out.

Now do all those features make it worth $400? That depends on your situation. There isn’t a right or wrong answer there, just your answer. About 1 in 3 of these top shooters would say “Yes, it’s worth it.” Of course, most of them shoot 5,000+ rounds every year, and that’s not the situation for most of us. Ultimately there are a lot of great options out there for scope mounts, at a range of prices from around $100 to over $400, and you can pick whatever product works for your situation and budget. God bless America! 😉

Cal Zant is the shooter/author behind PrecisionRifleBlog.com. Cal is a life-long learner, and loves to help others get into this sport he's so passionate about. Cal has an engineering background, unique data-driven approach, and the ability to present technical information in an unbiased and straight-forward fashion. For more info, check out PrecisionRifleBlog.com/About.
Previous Best Scope – What The Pros Use
Next Custom Rifle Action – What The Pros Use