How Much Does SD Matter? How To Predict The Future – Statistics For Shooters Part 1

As long-range shooters, we tend to obsess over every little detail. After all, we’re trying to hit relatively small targets that are so far you may not even be able to see with the naked eye. While you might can get away with minor mistakes and still ring steel at short and medium ranges, as you extend the range those small mistakes or tiny inconsistencies are magnified. So, most things are important … but to differing degrees.

There are so many variables that it’s easy to get lost, and most of us end up doing our best to spread our finite energy and resources in every direction. Is there a data-driven approach to help guide us toward the most important factors to increased hits at long-range?

I’m glad you asked! Bryan Litz created the WEZ (Weapon Employment Zone) analysis tool to gain some insight into this dilemma. So I dropped $200 for the Applied Ballistics Analytics Software Package, which allows you to run your own WEZ analysis. This gives you the ability to systematically study how different field variables in real-world shooting affect the probability of hitting long-range targets. Here is his summary of this software package:

“The Applied Ballistics Analytics software tool is a full-featured ballistics solver that includes the capability to compute expected probability of hit using the same Weapon Employment Zone (WEZ) method described in Bryan Litz’s book Accuracy and Precision for Long Range Shooting. This tool allows a shooter to see how his rifle can be expected to perform under a wide range of conditions, and how errors contribute in causing a bullet to miss its target.”

The WEZ tool appears to be doing what’s called a Monte Carlo simulation, which is a good way to model scenarios that have a certain level of uncertainty in the inputs. Monte Carlo simulations essentially play out hundreds or thousands of possible outcomes based on your inputs. The variables in each scenario are randomly populated within the ranges you set and according to a probability distribution. For example, if you gave some input that said your rifle was capable of holding a 0.5 MOA extreme spread, then it might play out one scenario where it drilled the exact point of aim, another where it hit 0.2 MOA high, another where it hit 0.25 MOA low, another that hit 0.12 MOA to the right, etc. Those shots would all still be within a 0.5 MOA group. It does that same thing for each of the variables in every scenario (muzzle velocity, wind call, range estimation, etc.), then it plays out each scenario, and plots where the shot would land. After it’s ran 1,000 different scenarios, it looks at the results of all of those and calculates your probability of hitting the target based on the variables you entered. Here is a screenshot of this part of the program, and I highlighted some of the key variables you can tweak. I’ve played around with the WEZ tool a lot, and it was very enlightening! It challenged a lot of my long-held assumptions about how important different aspects were. As Bryan Litz said in his book, “Looking at each variable separately teaches us how to assess the uncertainties of any shot and determine how critical each variable is to hitting the target.”

The last post looked at what kind of impact group size had at long-range. In this post we’ll look at another element that we handloaders tend to fixate on:

How much does SD matter?

Okay, hang with me! Here is how SD applies to the real-world: You can see the common bell-curve below, which is known as a normal distribution. If you fire enough rounds, there is a very good chance your muzzle velocities will eventually form a normal distribution just like this. Since we know that’s what the distribution will eventually look like, we can use our 10 shot sample to estimate what the distribution would actually be if we fired 1,000 rounds. This is an approximation, but it’s a useful one. Each band in the diagram has a width of 1 standard deviation. 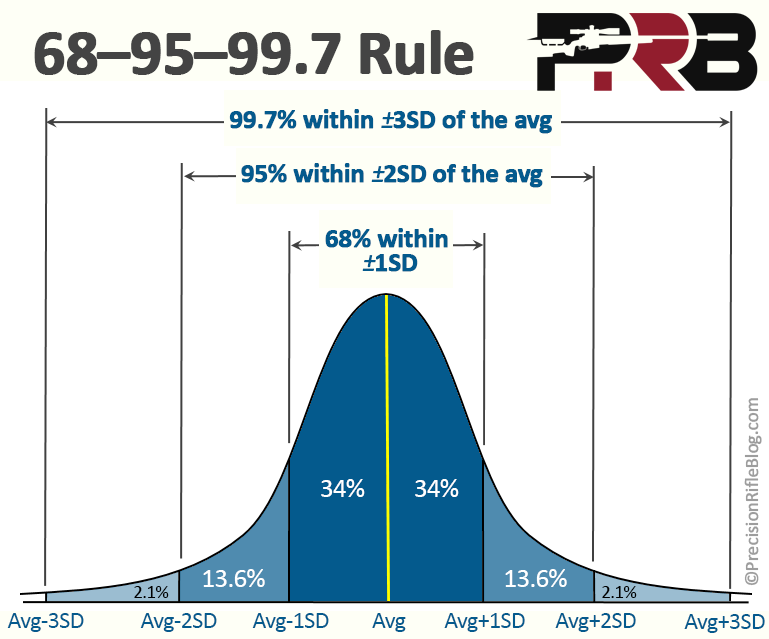 Now you should have the basics of how standard deviation defines variation of your muzzle velocities with a single number. Let’s turn to Bryan Litz to tell us what we should expect in terms of SD for muzzle velocity:

“Regarding available ammunition types, a Standard Deviation (SD) of 20 fps is considered relatively poor consistency, and is generally representative of mass produced factory ammo. 15 fps is considered better than average for factory produced ammunition, but still substandard for those who handload their own ammunition. 10 fps or less SD is typically the goal of most handloaders, and very few commercially available ammo suppliers are capable of producing ammo with SD’s under 10 fps.”

It’s relatively easy for a reloader to produce ammo with an SD of 15 fps, but you have to be meticulous and use good equipment if you want to wrestle that down into single digits. I have a friend who has handloaded ammo for his 6.5×47 Lapua and 338 Lapua with an SD of 3 fps across 10 shot strings! I’ve witnessed it with my own eyes, and he’s done on multiple occasions. 3 fps is the lowest SD I’ve ever heard of, but it takes exponentially more effort to creep down into those lower numbers.

Now that we have context for what you can expect, or what is typically the goal … let’s look at what impact shrinking our SD has on the probability of getting hits at long range. Lowering your SD has a slightly bigger improvement on the further target, but we can still see the point of diminishing returns as the lines start to level off. In these scenarios, there is a big 5% difference from 20 fps to 15 fps, but only 2.9% improvement from 15 fps to 10 fps, and then just a 1% improvement in hit percentage going from an SD of 10 fps to 3 fps! This is primarily because, once again, most misses at long range are caused by wind and not vertical dispersion. Bryan Litz says “If you’re missing the target for reasons unrelated to vertical dispersion, then reducing vertical dispersion won’t improve hit percentage very much.” Well, it makes a lot sense when you say it that way! You can see what I’m referring to in the shot simulations below. We’re shrinking the vertical spread, but most of our misses are because of the horizontal spread … so we’re simply not addressing the primary cause of the misses.

One last point to keep in mind, is that all of this analysis assumes you have centered groups. That means they represent the best case scenario for hit percentage, since your odds only decrease if groups come off center. If you’re scope isn’t zeroed, or your rifle is canted slightly to one side, or your scope’s clicks aren’t calibrated correctly, or you pull the shot … then your hit probability can decrease dramatically. But these simulations assume we have all that stuff squared away.

Other Posts In This Series

This post was one of a series of posts that takes a data-driven look at what impact different elements have on getting hits at long-range. Here are some others posts in this series:

If you want to dig more into this subject or explore some of these elements for your specific rifle, ammo, and ballistics, I’d encourage you to buy the Applied Ballistics Analytics Package to run these kinds of analysis yourself. You could also pick up Bryan’s Accuracy and Precision for Long-Range Shooting book, which has a ton of great info on these topics and other aspects of shooting.

Cal Zant is the shooter/author behind PrecisionRifleBlog.com. Cal is a life-long learner, and loves to help others get into this sport he's so passionate about. His engineering background, unique data-driven approach, and ability to present technical and complex information in a unbiased and straight-forward fashion has quickly caught the attention of the industry. For more info on Cal, check out PrecisionRifleBlog.com/About.
Previous How Much Does Group Size Matter?
Next How Much Does Cartridge Matter?

This is the last post in a series of articles focused on bullet jump research ...