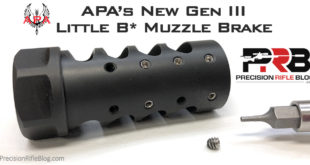 Best Muzzle Brakes & Suppressors – What The Pros Use Rifle Suppressor & Muzzle Brake – What The Pros Use

ThunderBeast has been the most popular rifle suppressor among the top 50 shooters in the Precision Rifle Series for the past 3 years in a row (see the data). In fact, of the shooters who suppressed their rifles, 1 in 3 chose a ThunderBeast can this past year. Thunder Beast Arms Corporation (TBAC) was founded and is ran by practical/tactical rifle competitors obsessed with long-range accuracy. Many believe they make the best precision rifle suppressors money can buy.

A couple weeks ago at SHOW Show, Zak Smith showed me their new and improved line of products. They’ve completely redesigned their line of 30 caliber suppressors, and made significant improvements. First, ThunderBeast simplified their product line-up. Over the past couple years, TBAC has offered 8 different 30 caliber suppressor designs. Those have been merged into 3 different products. ThunderBeast still offers suppressors for .22 and .338 calibers as well, but the recent updates were focused around their 30 caliber suppressors. So those are what I’ll focus on in this post.

A Primer in Sound

Before I dive into the sound data, let me explain some basics behind the science of sound:

“The decibel (dB) is the unit used to measure the intensity of a sound. The decibel scale is a little odd because the human ear is incredibly sensitive. Your ears can hear everything from your fingertip brushing lightly over your skin to a loud jet engine. In terms of power, the sound of the jet engine is about 1,000,000,000,000 times more powerful than the smallest audible sound. That’s a big difference!” – HowStuffWorks.com

When it comes to sound, there are two key concepts we need to understand: Sound Intensity and Perceived Loudness.

Because the range of possible sounds is so huge, the decibel scale is different from most. Its logarithmic, which most of us aren’t familiar with. A difference of 10 dB means the sound is 10 times more intense, in terms of acoustic energy. Every 10 dB is an order of magnitude. If there is a 20 dB difference, that means its 100 times more powerful (10×10), and a difference of 30 dB would be 1,000 times more intense (10×10×10)! To help you understand the decibel scale, here are some common sounds along with some visualizations of their relative magnitude. But, that doesn’t mean 10 dB is 10 times louder. When we switch from talking about sound intensity to perceived loudness, we end up in a strange mix of science and psychology, because loudness is a subjective feeling and can be perceived differently by individuals. For that reason, we actually can’t measure perceived loudness directly. But psychoacousticians have done enough studies to know in general when the sound level increases by 10 dB a sound is perceived as twice as loud (source). Similarly, a 20 dB increase in the sound level is perceived as four times as loud by the normal human ear (2×2).

Clear as mud?! Here is a table showing how changes in measured sound level would apply to both measurements:

Both OSHA and MIL-STD-1474E require hearing protection if sound pressure levels are 140 dB or more (for “impulse” noises like gunfire). However, hearing loss can occur from sounds as low as 85 decibels with long or repeated exposure. Noise-induced hearing loss is cumulative and permanent. Ear protection typically reduces noise by 16-30 dB, which you can find by looking at their Noise Reduction Rating (NRR). For example, the popular Howard Leight ear muffs have an NRR of 22 dB. That likely will not get you below that 140 mark without “doubling-up” by wearing ear plugs in addition to the muffs. If you’re using a brake, please protect your ears, and pass that message on to your shooting buddies.

TBAC’s new line of suppressors has significantly improved sound suppression. I’ve heard how serious those guys are about testing their products, so I asked Zak for some of the data they’ve gathered to give us an idea about the improvement in sound suppression. The data below shows how each suppressor performed, and how that compares to previous models. Note: All data was measured in accordance with MIL-STD-1474D using a Bruel & Kjaer 2209 Meter one meter offset from muzzle. The data was provided in ranges, which were +/- 1 dB from the values shown on the chart. For example, the Ultra-9 measured 132-134 dB, but is simply displayed as 133 dB on this chart. The “No Suppressor” reading was without a muzzle brake (plain barrel), and they estimate that a muzzle brake would be around 171-174 dB.

The big news here, is the new ThunderBeast Ultra-7 Suppressor. You can see the Ultra-7 is at 135 dB, which is 3 dB less than the previous 9” inch suppressor models (30P-1 and 30CB9 were both at 138 dB). The Ultra-7 provides a 33 dB decrease in noise from the unsuppressed measurement, which is over 8 times quieter (2x2x2)!

TBAC’s new 9” Ultra-9 suppressor was measured at 133 dB, which is 5 dB less than the older models. But that is only 2 dB quieter than the new 7” model.

Previously, ThunderBeast intentionally called their 5” cans moderators … not suppressors. That was because those super-short models were only able to get the sound levels down to around 152 dB. But the ThunderBeast Ultra-5 is their first 5” suppressor. At 144 dB you should obviously still wear hearing protection with it (which I’d still recommend with all suppressors firing supersonic ammo), but it’s designed for situations where more compact size is required, but you still need some amount of suppression.

Keep in mind the data shown on the chart was for a 308 Win, and this may not be what you experience with other calibers or cartridges. While these suppressors work well with 6mm and 6.5mm bullets, they may not provide the exact same level of suppression. The guys at Thunder Beast said in their experience the .260 Rem is a little quieter than the .308 Win. They didn’t have the exact measurement, but that is their experience shooting .308 and .260 rifles side by side with the same cans at matches over the past 5 years. Steve Adelmann explains, “The smaller the bullet and tighter the bore, the less noise escaping, all else being equal.” TBAC’s tests fully comply with MIL-STD-1474D, which is the gold standard of sound testing. But, I tend to side with Adelmann’s view on this kind of data: “I recommend viewing all published suppressor data with the same skepticism you would toward muzzle velocity numbers printed on an ammo box.” At the very least, it looks like those guys have made substantial improvements to the noise reduction on these new models.

So not only do the new ThunderBeast suppressors perform better, but they cut weight by up to 30%. Most companies advertise the weight of their brake-attached suppressors, so that is what I’m displaying in the chart above. They do that because their direct-thread versions are always a little heavier (typically by 1-2 ounces). ThunderBeast’s legendary 30P-1 suppressor weighed 17.2 ounces. We know the Ultra-7 provides even better suppression than the 30P-1, so that is what I’m thinking of switching to. Not only is the Ultra-7 quieter than the 30P-1, but it’s also be 2” shorter and 33% lighter! Better, smaller, lighter … sign me up! Traditionally, precision shooters preferred direct-thread suppressors, because they’re thought to be more accurate. There are a lot of Quick-Detach (aka QD or Quick-Attach) suppressor designs out there, and while they make it quicker/easier to attach a suppressor, some make small compromises on accuracy in the name of convenience. That degrade in accuracy typically results from small amounts of play in the connection, or the suppressor orientation isn’t exactly the same each time it’s attached. While it may not result in a huge loss of accuracy, most long-range shooters refuse to accept any compromises on that front. We require suppressors to have an identical effect shot-to-shot, and be completely repeatable when removed and reattached.

ThunderBeast’s TOMB mounting system is different than a QD mount, because it doesn’t use a lock. As SilencerShop.com explains, “As a general rule, mounting systems that don’t use a lock will deliver the same accuracy as a direct-thread suppressor. … Remember that most modern quick-attach suppressors provide good accuracy for most shooters & hunters; but, if you’re looking to squeeze out every last bit – then a non-locking or compression mount is the way to go.”

Zak actually believes their compact Thead-Over-Muzzle-Brake (TOMB) system is a better solution than direct-thread. He explains, “With the CB mount, the suppressor mates to a conical shoulder on the brake and locks up rock solid and extremely tight.” This CB mount is very similar to their previous BA (Brake-Attached) models, which have been in service for several years with outstanding results. On the other hand, the direct-thread connection simply bumps up against the small side-wall of the barrel. That can be a less solid connection, which can allow the direct-thread suppressor to work lose over time. Veteran shooters develop the habit of checking that their suppressor is still screwed on tight after each string of fire, because if the suppressor works loose even a little it causes a significant POI (point of impact) shift. “A tight suppressor is a happy suppressor,” says Steve Adelmann.

Zak also mentioned “The direct versions can be easily changed to the CB mount, or their threads can be changed. They will also have 17-4 stainless threads. This is a big departure from the status quo of cutting threads directly into the rear end of the can.”

The reception of this new Ultra series of suppressors has been so strong that Thunder Beast is putting a full 2nd shift together to scale up their production and try to keep up with demand.

These improvements all sound great on paper, but I hope to get my hands on one of these new suppressors at some point and try it out in the field. I personally own a ThunderBeast 30P-1 (bought out-of-pocket), and I’ve fired 1,000+ rounds with it and used it in several competitions. It is an outstanding suppressor for a precision rifle. Maybe these new designs will follow in its footsteps.

I’ll leave you with a video teaser the guys at Thunder Beast made for SHOT Show, which shows these new products:

Cal Zant is the shooter/author behind PrecisionRifleBlog.com. Cal is a life-long learner, and loves to help others get into this sport he's so passionate about. His engineering background, unique data-driven approach, and ability to present technical and complex information in a unbiased and straight-forward fashion has quickly caught the attention of the industry. For more info on Cal, check out PrecisionRifleBlog.com/About.
Previous 7 Ways the New ARC Rifle Action Blends the Best of Old & New
Next The Cost of Reloading vs. Match Ammo