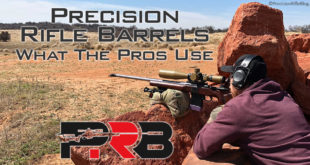 Best Rifle Barrel – What The Pros Use

One of my closest friends has two 6.5 Creedmoor rifles made by Surgeon Rifles that he has tried a couple different barrel sizes on.  He started with a 26″ barrel, because that is what Surgeon typically used but lately we’ve been shooting in more practical/tactical long-range competitions where you have to carry the rifle for miles every day … so he wanted to lighten the load.  He was also planning to add a suppressor to his rifle, and a 26″ barrel + 9″ suppressor makes for a pretty long and cumbersome rifle.  He eventually rebarrelled to a 22″ barrel, which he loves.  Both of the barrels were big, heavy, Krieger #10 contours with 1:8 twists (and both rifles could shoot 10 shot groups under 1/2″ … mostly in one ragged hole). He mentioned that he’d searched online to see what barrel lengths people were using for the 6.5 Creedmoor cartridge and get an idea for what kind of velocity he would be sacrificing, and saw a lot of debate … but not a lot of helpful information.  The new Berger Bullets Reloading Manual said you could expect a change of about 25 fps per inch (see excerpt image).  So he was expecting 100 fps loss, but that is not what happened.  So we thought it’d be helpful to share what he found.  He regularly shot each barrel length over an Oehler 35P chronograph, which is a professional grade chronograph and one of the most accurate ones made.  He kept really good documentation on the velocities, and here is what he found.

This is the original configuration he tried, because it was the one Surgeon typically makes.  Here are the velocities he found:

So ultimately, after he added the suppressor he only lost 27 fps with 4″ less barrel.  That essentially means he only has 2/10 more vertical adjustment of a mil at 1,000 yards, and wind drift is virtually identical.  In return he has a lighter, more maneuverable rifle … and he couldn’t be more happy with that trade.

Cal Zant is the shooter/author behind PrecisionRifleBlog.com. Cal is a life-long learner, and loves to help others get into this sport he's so passionate about. His engineering background, unique data-driven approach, and ability to present technical and complex information in a unbiased and straight-forward fashion has quickly caught the attention of the industry. For more info on Cal, check out PrecisionRifleBlog.com/About.
Previous 200+ McMillan Stock Colors Photos
Next MIL vs MOA: An Objective Comparison 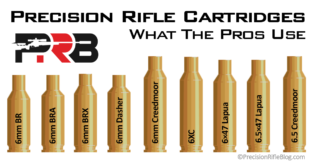 Rifle Caliber – What The Pros Use

Welcome to “What The Pros Use” 2018 Edition! I recently surveyed the top ranked shooters ...