END_OF_DOCUMENT_TOKEN_TO_BE_REPLACED

When you extend shots into extreme ranges (like 2000+ yards), you’ll face some new obstacles. A few factors that could be safely ignored inside of 1000 yards become critical to getting rounds on target. You’ll face new equipment challenges that may not be obvious. As your bullet’s time of flight extends up 3 seconds, and possibly even up to 6+ seconds, priorities shift. In this series of posts I’m trying to highlight a few things that make extreme long range (ELR) challenging, and pointing out a few products worth checking out that might help. In the first post in this ...

END_OF_DOCUMENT_TOKEN_TO_BE_REPLACED Earlier this year, I asked the highest ranked shooters in the Precision Rifle Series a simple question: If you could just give one piece of advice to a new shooter wanting to get into this sport, what would that be? Their answers are packed with hard-earned wisdom. I personally learned a lot, and this advice has changed my approach and how I practice. I’ve shared a few of these quotes in previous posts, but I just wanted to share the full list with all my readers, because it is so helpful. Although these guys each completed the survey individually, it’s ...

END_OF_DOCUMENT_TOKEN_TO_BE_REPLACED

Precision Rifle Chassis & Stocks: What The Pros Use 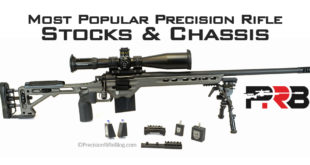 I’ve been really looking forward to this post, because there has been so much advancement in how we use stocks and chassis over the past year. More has changed on this front than any other. So I’m excited to dive into some of that in this post! I recently surveyed the top 100+ shooters in the Precision Rifle Series (PRS), and this post reviews the stocks and chassis those guys are running this year. For those not familiar with the PRS, it’s an organization that tracks how 2,000+ competitors place in major rifle matches across the country. PRS matches are ...

END_OF_DOCUMENT_TOKEN_TO_BE_REPLACED

Best Rifle Trigger – What The Pros Use For the first time ever, I’ve collected data on what triggers the best precision rifle shooters in the country are running! There are some innovative designs out there I wasn’t even aware of until this data came out. Very interesting stuff! I recently surveyed the top 100 shooters in the Precision Rifle Series (PRS), and this year I included a question to capture what trigger these elite shooters were using in 2015. The PRS tracks how top competitors place in major rifle matches across the country. These are the major leagues of sniper-style competitions, with targets typically from 300 to ...

END_OF_DOCUMENT_TOKEN_TO_BE_REPLACED This post summarizes the results for the recoil tests ran on 20+ muzzle brakes using 6mm and 6.5mm test rifles. To see the full line-up of muzzle brakes tested, check out this post. The recoil data was collected using high-speed, high-resolution force sensors. For more info on the test equipment and how the data was gathered, please see the previous post. How to Read the Results As we discussed in the last post, when someone claims a product “reduces recoil by 50%” … it usually isn’t clear what they’re talking about. Unfortunately, there is no industry standard for measuring recoil, ...

END_OF_DOCUMENT_TOKEN_TO_BE_REPLACED This post provides a primer on recoil, and then explains how I measured recoil, including the approach and specific equipment used. It also reviews the rifles and cartridges tested. What do we mean by recoil? I’ve read a thick stack of articles and white papers on this subject, and suffice to say we can get pretty deep in the weeds if we weren’t careful. But, I’m going to try to keep it simple and on point. For our purpose, recoil is the rearward kick we feel when we fire a rifle. I’m less interested in the esoteric mathematics-based models (although ...

END_OF_DOCUMENT_TOKEN_TO_BE_REPLACED This is the first post in a series that will cover the results from an epic muzzle brake field test. This represents an unprecedented, data-driven approach to evaluating the best precision rifle muzzle brakes on the market. Hundreds of hours have gone into this research, and the tests I conducted are built on advice and feedback from some of the most respected experts in the industry. This included leading manufacturers, top shooters, gunsmiths, mechanical engineers, university faculty, and defense contractors who have done similar work for the military. Thanks to all the guys that helped me with this! I tested ...

END_OF_DOCUMENT_TOKEN_TO_BE_REPLACED

With the number of “overbore” rifle cartridges popular today, barrel erosion is becoming a hot topic.  For example, competitive shooters using a 6 PPC typically replace a barrel after 700-800 rounds, and a 6.5-284 might also need to be replaced before the 1,000 shot mark.  That means the cost to keep a good barrel on the gun could be 60-70¢ per shot before we even consider the cost of components like match-grade bullets, brass, primers and powder.  In reality, short barrel life could easily double your cost per shot.  So what can we do to prolong the accurate life of ...